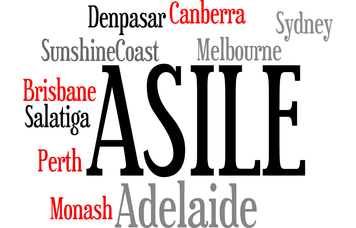 Participants deemed the inaugural conference a success and this was swiftly followed by a second national conference held at Monash, Victoria in July 1995 and was organised by Professor Barbara Hatley and Professor Harry Aveling. At the Monash event, it was resolved to constitute the newly formed association and give it the name "Australian Society for Indonesian Language Educators" (ASILE). A committee was elected, comprising of two members of the formative group from Flinders University, the two convenors of the Monash conference and two representatives of a Sydney group who had proposed to host a third conference in 1996.

ASILE conferences have continued to be organised on a ratational, voluntary basis with no permanent board or secretariat.

In recent years ASILE conferences have been hosted by educational institutions in Indonesia, strengthening relationships with Indonesian language experts and researchers and adding the element of in-country authenticity.

With a strong connection to the Indonesian concept of "Gotong Royong" ASILE continues to be maintained, building upon the success of past conferences through the work of many volunteers.

In 2016 the ASILE conference will again return to Adelaide.